Tales of love and loathing

Well, I've been to the concert which I mentioned yesterday, and it was rather interesting in that I loved the Mozart Quartet (which is unusual for me since it was Mozart after all, but I guess it must have something to do with the piece's motto, which is "Dissonance"), I liked the Dvorak (which is ok since he's dead for more than a century now), and I loathed the César Frank Quintet, which to my ears was a heap of organised noise, even though he's dead for more than a century!

The Chilingirian Quartet have excelled with their vivacity and coordination, which makes us forgive the odd slip. Here's a bootlegged picture of their performance. The weird concavity effect is not an optical illusion or a fisheye converter on my cell phone, but rather the concave back of Wigmore Hall. 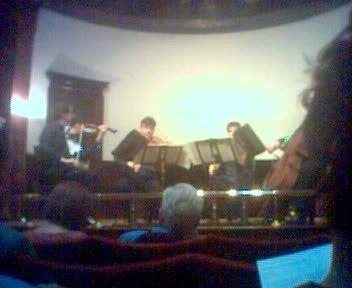 And Julian Jacobson on the piano was very impressive. I wonder why I haven't been to piano recitals anymore for years now. We'll have to change that.

On a considerably more wordly note: How the descendants of César Frank beat the English 2:1 tonight is beyond me! The streets were empty when I walked down to Wigmore Street (we're talking about Oxford Street here - empty - as in: nobody!), and the mood was enthusiastic afterwards when the score stood at 1:0 for England. But they were hatching their hens a bit too early, or whichever way the saying goes. At any rate, the Scottish friend (no, not Macbeth) I had dinner with (at Carluccio's - quite decent) enjoyed himself immensely, as did the Italian waiter. Here's to Europe!
Posted by Chris at 01:18