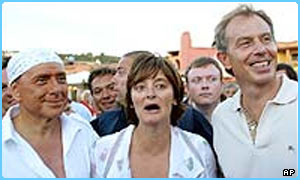 It's always nice of course to have friends in high places, especially if they have humongous villas in the mediterranean at their disposition ...

As the British Prime Minister however, I'd be really concerned with who I am seen to be friends with, namely outside of government obligations. I would have my doubts about a commendatore of a southern republic who may soon be found a convicted crook and fraudster, and whose most important motivation to take the reigns of said republic obviously was to protect his very own private interests - after all, he has still not dissociated himself from his media empire despite his election promise to do so within his first 100 days in government, and otherwise he has not achieved any of his important goals. So I suppose my assertion about his motivation is valid.

But at least, the Cavaliere's "Pirate of the Mediterranean" look is more honest in a way than probably intended. Would you have guessed the reason for that guise? Well, after his recent face lifting (sic!), Mr. Berlusconi felt like improving on his wig some, so it appears that he has got a hair transplant. One would wonder where he's got that hair from? Surely we will have news of him chasing after young boys before long.

Well, some people go to ranches in Texas, others to villas in the mediterranean, but such are the more ridiculous sides of the coalition of the drwilling ...
Posted by Chris at 13:23