I'll go to bed very soon, but not before posting about my day of music which spanned no less than 6 centuries today. It started off with the already mentioned performance of Elektro-Punk (I think) Tomi Z. at 1am in the morning: Very loud, silly, in your face, obnoxious, lewd, direct, messy. Very much alive. 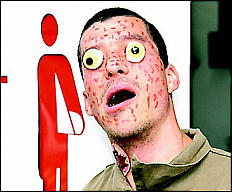 It ended sedately, i.e. in line with my current state of exhaustion, with a concert of italian madrigals from the sixteenth century. Cipriano de Rore composed those madrigals mostly on classical texts by Francesco Petrarca, whose 700th anniversary is being celebrated with a special exhibition in Basle where he lived for a bit before the big earthquake (a recurring theme...) struck in 1356. Incidentally, Petrarca was rediscovered as a founding father of humanism not least by Basle book printers in the early 16th century, hence there are lots of fine incunabula on display in that exhibition.

But I digress. I wanted to tell you about the concert: It was very low, beautiful, intricate, dialectic, refined, precious. But very dead.