Of fools and GNH

The concluding issue of The Economist is remarkable indeed. Not only does it give us a summary of the past year in verse, as mentioned earlier. It also contains a critical review of modern day (perhaps) Shangri-La in its reïncarnation as Bhutan (subscription required) - a country which apparently is not looking to maximise its GNP, but rather its Gross National Happiness! Which would be nice, of course, if it were not to run some serious risk of Orwellian doublespeak.

But that's not all: in a fit of self-referentialism, it surveys - firmly tongue-in-cheek - the post-modernist academic literature deconstructing The Economist and comes to a surprising conclusion. Read it here if you can...

Equally surprising is the paper's finding that George Bush is not too religious, although it is not made that explicit. Personally, I am not so much worried about his religiousness, or asserted lack thereof, rather than the administration's increasing inability to listen to outside positions.

"He was deeply learned, without possessing useful knowledge; sagacious in many individual cases, without having real wisdom...He was fond of his dignity, while he was perpetually degrading it by undue familiarity; capable of much public labour, yet often neglecting it for the meanest amusement; a wit, though a pedant; and a scholar, though fond of the conversation of the ignorant and uneducated...He was laborious in trifles, and a trifler where serious labour was required; devout in his sentiments, and yet too often profane in his language..."

Even though some may think that this is a profile of yours truly, it's a description of King James I.. The Economist is running a competition for the Honourable Title of The Wisest Fool. The criteria are as follows: He or she must be fundamentally an idiot, but a shrewd or cunning one. Candidates need not inhabit Christendom, but they must be alive, or have been in the past 50 years. Submissions to reach competition@economist.com by January 17th! 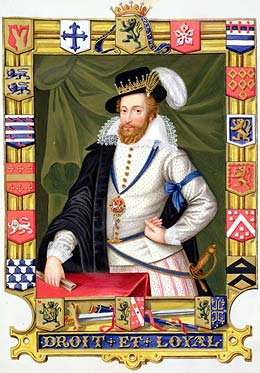 P.S. My heartfelt congratulations to the Ukrainians! According to the exit polls and - more importantly - the Central Electoral Committee, the liberal candidate has ended up winning by a large majority, which is a major slap in the face of the Russian president. I don't think he qualifies for the competition ...
Posted by Chris at 23:34