This is my final post on the subject of the selection of a new head of the roman catholic church - it has just been announced that Cardinal Joseph Ratzinger of Germany has been selected and has assumed the name of Benedict XVI. 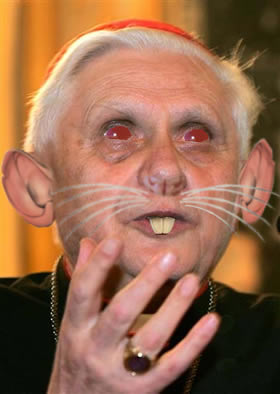 Ratzinger is considered to have been the "neo-con" brain behind the late Pope JP II. Only on Sunday, he has preached that "We are moving toward a dictatorship of relativism which does not recognize anything as definitive and has as its highest value one's own ego and one's own desires." He seems to have made an impression on his electorate, selected by his predecessor.

"Robert Mugabe, kiss my papal a***". Although the Zimbabwean manages to choose his electorate in his own lifetime.

"Robert Mugabe, kiss my papal a***". Although the Zimbabwean manages to choose his electorate in his own lifetime.