Here is the second installment of my Budapest report! Also available are some pictures .

Saturday's programme consisted of a visit to Petöfi Csarnok where I expected to see a flea market. But since some motor bike race was on, I moved on to the Mücsarnok on Hösök Tere with its interesting exhibition of the Mayer collection of Dali which has been put together on the occasion of the artist's 100th birthday. Up until then, I only knew the best known works of Dali, which I didn't really like. But this exhibition was quite a surprise, so I bought the catalogue. Also on show are some works by Peter Weibel, pictures of which decorate this post. 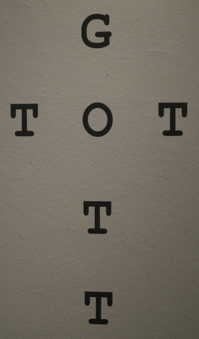 Since I did want to get some market exposure, I went on to the Központi Vasarcsarnok (giving you a taste of Hungarian here), which is an impressive market hall right in the center. After a total renovation, it has been inaugurated by HM QE II in 1993. And after that, some relaxing soaking in the hot springs of Szechenyi was definitely in order.

So, what's my impression of Budapest? Language seems to be a good place to start. I love to listen to its melodious, yet entirely incomprehensible stream of vowels which evidently even follows some rules of vowel harmony. Since it is part of the finno-ugrian family of languages, Hungarian is probably entirely foreign to most other European languages, and the Hungarians themselves take great pride in their language and see it as an important source of their identity. Foreign languages are not widely known & used rarely, with English being predominant with the younger generation now while German used to take that position before (after mandatory Russian, of course). Consequently, there is some communicative insularity.

Nonetheless, Budapest gives the impression of a solidly European city with a unquestionably metropolitan attitude. That probably has to do with its great pre-war history as an important center of European culture & intellect as well as having been the twin-capital of the Austria-Hungarian empire. But being on the losing side of both wars, it lost much of its Hinterland, which still appears to be a sore point for some. Having been on the forefront of opposition against the iron curtain is definitely another, more recent source of pride & identity, even though some people may look back in nostalgia on their positions of power. Going forward, I would not be surprised if Budapest were to re-assert herself as an important thought leader in European matters - but only if it comes to terms with its own still controversial recent past. Berlin & Paris, take stock, here they come!