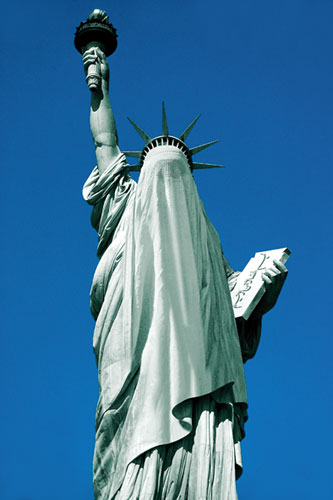 (aes via pieceoplastic)
That's the kind of advice many Europeans seem to be following these days. Today the Dutch have overwhelmingly joined the French in saying No to the EU Constitutional Treaty, which is clinically dead now.

It appears that the bet I've placed with an EU lobbyist some two years ago is paying off now. There are many good material reasons for not accepting the draft treaty as a European Constitution. One, it's definitely not a Constitution in the traditional sense, establishing statehood for Europe - in fact, it is (or was) an update to the Treaties of Rome with some new features to accomodate the expanded Union. Two, it was almost exclusively an executive led project which was supposed to bring the EU closer to the citizen. Yet, there is no sign of a European citizenry in the ratification procedure. Three, the text lacks the elegance & brevity of a real Constitution - sorely. In Philadelphia, I bought a facsimile of the US Constitution with its seven articles which can be put on one parchment.

So, that's the formalistic argument, which certainly does not justify to kill the project, unless you're really pedantic. I know for a fact that the French are not (not so sure about the Dutch). But unfortunately, there's more. One is the ratification procedure by referendum in some countries. We know our referenda here in Switzerland, having a couple of them each quarter. Believe me, the best thing to do if you want to get a No is to tell the electorate that their only choice is to say yes. Then there's the current political & economic situation in most continental European countries which are in denial (both, governments & electorates) about their serious need to open up & reform & get their government finances in order. A climate of fear does not allow for courageous projects, unless there is a perspective for change & strong leadership. Strong leadership? Just look at that loser couple Chirac & Schröder. And as to the perspective of change: the draft Treaty is the outcome of a long process of horse-trading and thus a convolute of institutional rules & material policies devoid of any potential inspiration. Consequently people have been voting against their current dissatisfaction rather than against the Treaty itself. Thus, given a bit of time & an upturn in the economy, they might even vote for it without any changes to it, if that were not so outrageously undemocratic...

But here is my most important criticism of the Treaty: As a would be Constitution, it should only contain institutional rules & procedures that are devised for eternity (in principle). Never should there be material policies, which are prone to interested parties' support and opposition. For hence comes the probably fatal equation of the Treaty with much despised globalisation and vulture (or was it locusts?) capitalism. Which of course disrespects the fact that we're all locusts!

So, what happens now? Will the EU brake down and will the Euro be abolished? Of course not. The EU will continue to work as an institution. The Treaty however will be shelved with key provisions being put into place pragmatically. And the pressure to reform will keep building regardless.
Posted by Chris at 23:49

I looked it up, and we're not pedantic (generally speaking).