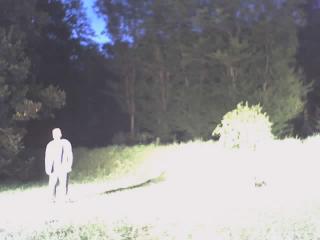 Just back from a breathtaking performance of Der Ackermann aus Böhmen, based on a 15th century text by Johannes von Tepl. The text itself s a grand renaissance disputation about life & death between a man who has just lost his wife, and Death personified.

But it was the setting & execution that rendered the experience so special. This was the final performance of a series set open air in the Hörnli cemetary, which is a rather huge, quiet funeral site. There's a natural stage against the backdrop of a couple of old trees, and the weather was also playing its part in that it was laboring with a thunderstorm, complete with some showers, distant lightning and rolling thunder. That was not the only accoustic accompaniment, though: In a side tent, a bassist & a percussionist were playing something close to Indian raga style music, which was suiting the mood perfectly.

If you read this as a recommendation to go and see it, then you're certainly right. Unfortunately, the Basle series is over now, but there will be some more performances at the Bremgartenfriedhof in Berne. Go see it!
Posted by Chris at 00:10