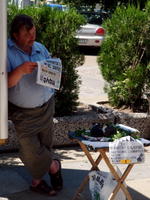 The apparently popular story about a Hamster-powered phone charger reminded me of this strange guy that I saw hanging around in downtown Sofia with his two guinea pigs & a bowl. Initially I surmised that he was proposing to sell them, but 1 Lev (EUR 0.50) looked something awefully cheap, especially since business didn't appear to be so brisk what with him having no additional supplies in evidence.

Further research with a Bulgarian friend unveiled the unexpected: What you see in that picture is in fact a guinea pig powered crystal ball! For the aforementioned Lev, the guinea pigs would pick a slip of paper from the container on which the client's future would be described. Go figure that one!
Posted by Chris at 16:38