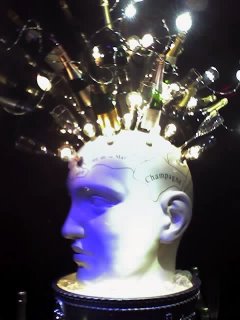 The movie's title has an edge, no doubt, but it's really quite smart. It's the somewhat grungy éducation sentimentale of a 17 years old thumbsucker who becomes a master debater once he's on Ritalin after a ridiculously amateurish diagnosis, but when he stops it, he turns back to - no, not thumbsucking, with exceptions - his grown up self. He's supported by a great cast - who'd have thought that Keanu Reeves is capable of irony? That's all us humans are capable of: guess, try, and hope. Ok, that's not very ironical, but go see it, then you know what I mean. Check out the Thumbsucker blog.

On the way back from Haymarket, I passed Fortnum & Mason's where I took the adjacent picture of their phrenological champagne decoration that I know of somebody who will just love it.
Posted by Chris at 00:52