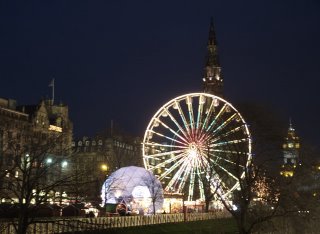 Unfortunately, my short trip to Edinburgh has already come to an end & I am back home again. However, I enjoyed the trip down Memory Lane immensely! It was almost as if I'd been living there just a fortnight ago. Well, the place has changed a bit alright, but only for the better. The Capital of Scotland has certainly gotten its act together!

The Clubhouse proved to be the perfect location for my stay. Bang in the middle on 100 Princess Street with a spectacular view of the Castle & the Mound right from my large room, which cannot be said to be overpriced at £60 per night, and that's including tax, breakfast & dinner. I was very pleasantly surprised about the quality of the food at the restaurant, which is also available to non-members & highly recommended: There is no way you can have a good three course dinner for just £18 overlooking the Castle anywhere else! The only minor complaint I'd have is that I was served a (nice) fish course with an ordinary knife instead of a fish knife, but that's to show how good it was. Also, the choice of side dishes might be a little more imaginative. But it's certainly better than the London Clubhouse. What's not so good just now is the internet connectivity. But they're holding off investing in a wireless LAN because apparently, the whole of Princess Street will be converted in one big wireless zone within a few months, so that seems to make sense.

Of course, I drunk too much during the stay, especially when I joined Paul's stag party, which I will not be indiscreet about. I noticed a marked change in the beer offering however: Most people seem to be drinking bottled foreign beers (mostly lagers) instead of the tasty local Ales. That is something I cannot understand at all: Lagers are mostly tasteless anyway, and in bottles they're definitely more expensive also. Very odd - let's hope it's a temporary marketing induced fad.

So, after meeting the guys on Friday night, going for a fun round of Curling on Saturday afternoon, followed by Dinner and a late (or early) night out, I woke up to a sunny Sunday morning, having a cooked Scottish breakfast with the aforementioned view. Thereafter I went on an extensive walkabout with a stop at the Castle and down the Royal Mile to the Scottish Parliament, where I took advantage of a guided tour since I've never seen it before. Apart from the fact that it cost about ten times more than planned, it is a really fascinating & smart building complex which fits in very well with its sophisticated surroundings of Holyrood Palace & Salisbury Crags (pictures to follow). I like it a lot.

Then on to the National Gallery of Scotland where I saw the Turner in January exhibition of watercolours. I am increasingly taken in by Turner, having recently heard a fascinating report about The Fighting Temeraire. Back to the Club to have dinner and on to the Jolly Judge to have a quiet pint by myself and read Friends, Lovers, Chocolate. Had I known that the Jolly Judge has an open wireless LAN and is blogland, I'd have posted from there, of course!

Speaking of McCall-Smith's latest book (is it? - no spoilers, don't worry): I finished it on the way back, having started only on Friday. I love it & recommend it with gusto! It is really hard to describe, but I think the author goes a long way in sketching the unagitated, yet disciplined civility mixed with a rather moralistic trait that is Edinburgh. And then go and read Ian Rankin's Inspector Rebus stories ... there's an entire universe of crime in such a small, guarded place! Incidentally, there was an intriguing article in the FT Magazine, speculating on the reasons why British authors are featured so disproportionately highly on the Index Translationum. "English can be earthy when it chooses to be, high-flown when it cares to. It is one of the few languages in which one can swear like a German and make love like the French."
Posted by Chris at 00:42