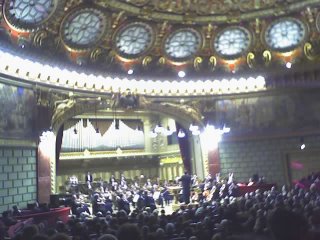 Try as I might, I still cannot bring myself to like the stuff. Nonetheless, I spent a pleasant evening at a concert with Filarmonica George Enescu in Bucharest's splendid Atheneum. I even met some acquaintances!

The programme consisted entirely of German romantic staple diet (why's that anyway?), but - with the exception of Brahms' 3rd symphony (not quite sure whether it contains the theme to Schindler's List or not) - it was bearable: Mendelssohn's Uvertura Hebridele (aka Hebrides Ouverture) and two piano pieces by Liszt. I particularly appreciated his Danse macabre with its dies irae theme. I think I'll start collecting the variations on that theme: I particularly like Danse des ombres and Les furies from Ysaÿe's six sonatas.

It was fun to talk to my neighbour - make that: try to talk to my neighbour: He was an elderly chap from Moldova who only speaks Moldovan & Russian. Tonight, I learned that there is not only Moldova as a proper country, but also the Romanian principality of Moldavia, and Gagauzia as an autonomous territory within Moldova. I'll not even start about Transdnistria, a self-proclaimed independent country recognised by no-one but Russia, I think. How's that for a geography lesson on St. Patrick's Day, eh?
Posted by Chris at 23:39

Have you been to Molvonia yet? :)