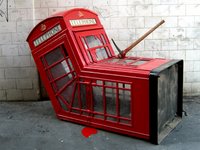 81 factoids from the fairest isle of isles! For starters, have a look at Banksy's latest that was seen earlier today in Soho, but swiftly removed by Westminster Council, according to this (via Smart Mobs). I really like this one, and I can easily imagine copies of it turning up in souvenir shops in no time. I'll have one, please!

But that's just the first one. Get the other eighty from HMW Royal: On the occasion of HM QE II's forthcoming 80th birthday (on April 21st for those of you who want to send her a card), the Palace has issued a collection of eighty trivial facts about her. Did you know that Mr. Blair was the first PM born during her reign (9)? Or that HM has sat for 139 official portraits (38), only one of which is a hologram (39)? Or, astonishingly, that the Queen has sent her first email already in 1976 (53) - hey, yet another anniversary: 30 Years of Royal Email! And that kind of fits nicely with the introductory picture ...

While we're at it, and to round things off nicely, check out a fine Bob the Builder-style animation in Ricky Gervais' podcast.
Posted by Chris at 23:27