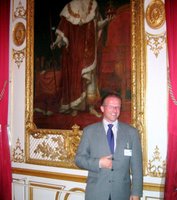 Guilty as charged! I haven't blogged from Paris, even though I would have had the means and the motive, however the opportunity was in rather short supply. So then, here's a quick update - for photos, please go to flickr.

The train ride was a rather good, effortless experience to be repeated on future trips, even though I didn't quite get the TGV despite of having booked on said site, but I guess they wouldn't route that miracle of transport technology via Basle just for yours truly. I arrived in time, had an interesting luncheon meeting and subsequently a nice evening reception at the British Embassy as part of the Edinburgh University General Council meetings in Paris. It was good to see acquaintances from earlier events and meet new ones!

The event was continued with a formal lunch in the Cité Internationale Universitaire on Saturday. There was also a guided tour through this rather grand, albeit somewhat uninspiring collection of student halls. The evening found its conclusion with a Gala Dinner at the Restaurant of the French Senat, and a great chat with P. over an interesting bottle of Pelforth.

Sunday was dedicated to window shopping (in what kind of metropole do shops close on Sundays??) and discovering the streets until the train's departure. I think I quite like the Quartier St. Germain, where I discovered something very French, namely the Marché de la Poésie. This is a big open air affair where carefully and sometimes even artistically edited poetry is on sale in small editors' booths in front of Saint Sulpice. And what's even more French than that is the fact that the Marché has a podium discussion where alternatives to the market economy and more state intervention for the support of literature are demanded. It's surprising that those undoubtedly very intelligent people don't realise that with government funding of the arts comes stagnation, crustification and red tape.

On the way home, I read Le Figaro's interesting overview of who owns Paris (neither government nor church, surprisingly). Coïncidentally, the Magazine also had an article about traveling in Scotland. Nice! Last, but not least I discovered that my preferred newspaper is now available for complete download to all subscribers, so I had something else to entertain me on the long way back.
Posted by Chris at 01:04

Sounds fun. I'm heading over to get me some NZZ content right now. I actually needed an article in German and viola, the Captain passively delivers.