As you may be aware, I have a new dog. In Switzerland, that invariably involves some administrative procedures. There's a communal dog tax to be paid, for which I registered Laika today. What with the current, rather ridiculous debate about "fighting" dogs, there is more to come.

On top of that, there is a country wide pet identification system called ANIS, which involves tagging your pet subcutaneously with an RFID tag. This system has been declared mandatory for all dogs beginning this year. Seeing how there are certainly about one million dogs in this country, and assuming an average life expectancy of 10 years apiece, there are 274 database modifications from natural reasons only each and every day, and that's not counting address changes. So I was expecting to get access to an efficient online workflow. But nothing could be further from the truth. The good people at ANIS actually insist on sending paper forms to and fro! What's wrong here?!?!
Posted by Chris at 18:22 No comments:

Shaken or stirred - I don't give a damn

While the quote may not be verbatim, it is certainly in keeping with the style of Casino Royale, the new Bond. This is IMHO the most authentic Bond ever. Seriously.

Authenticity starts at the opening credits. No psychedelic floating soft porn, but new, theme based, old school visual language. The story is based closely on the first Bond novel with added leverage (literally). Bond's character has been very appropriately adapted to the new actor, and, incidentally, to Ian Fleming's original design: In M's words, Bond is a "blunt instrument", he doesn't care much about subtle and finesse, effectivity will do. But despite of his dry business sense, he is passionate and smart. I should add though that the passion gets beaten out of him very painfully in the course of action, but his smartness remains. In that sense, Bond is much like Jack Bauer in 24.

There's some really good extensive dialogue even - probably the longest ever, without intermittent casualties. The high tech gadgetry is there, but lacking resourceful Q, it is kept in the background, as is the unusually discreet product placement. Amazingly, the hallmark Bond tune is entirely absent, which is only logical, seeing how Casino Royale is about the making of James Bond as a Double-0 agent.

Switzerland features fairly prominently, as it often does in Bond movies. Some of the great scenery is probably shot in southern Switzerland, and there's Mr Mendel, a somewhat featherbrained Swiss banker with his suitcased account remote control. But I shouldn't forget Mr Mendel's employer, Basle Bank! I say, may home town makes the new Bond! Too bad there is no such bank.

P.S. Watch this interview with former CIA director James Woolsey. Its takeaway: The better you are at what you do, the less people know about it.
Posted by Chris at 00:58 No comments:

Browse the forecasts of over 70 of the world's most brilliant scientist for the next 50 years, put together by the New Scientist in it's 50th anniversary edition. I especially like this and this.
Posted by Chris at 02:01 No comments:

The Istanbul taxidriver is a virtuoso with his vehicle. He studiously reads the traffic's score & adjusts to the road's vagaries in his trajectory. Like an organ player interpreting Bach's Toccata con Fuga, he would happily apply his full person in controlling the wheel, the gear and pedals. He seldomly engages the brakes, but would rather use the hooter & the accelerator in its stead. Despite of the full road orchestra's din, he maintains his focus on his part by listening to Turkish pop music blaring from his radio.

His masterly performance can be seen during each rush hour for just a few yenteli. Sit back in awe and enjoy!
Posted by Chris at 23:30 3 comments:

Email ThisBlogThis!Share to TwitterShare to FacebookShare to Pinterest
Labels: travel 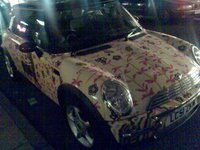 Remember my bout of nostalgia concerning Biggles? Imagine my surprise when I walked past Hatchard's tonight and saw this! The Biggles series has been republished!

Since it's not worth while entering a bookstore to buy just one book, I stocked up on more recent Scottish crime literature, namely the new Rankin as well as the new McCall-Smith. Since Mr McCall has been rather prolific lately, make that two. But Dream Angus is part of Waterstone's 3 for 2 offer, so it's only natural for the parsimonious Swiss to get another two books: this rather rather useful almanach and, in preparation for next week's trip to Istanbul, Nobel prize winner Orhan Pamuk's Istanbul. Memories of a City.

Until further notice, all time wasting is off!

P.S. Have a look at the amazing new Alice in Wonderland decorations in Fortnum & Mason's shop window. Pictures are available in my flickr gallery.
Posted by Chris at 00:27 No comments:

Have I mentioned that I am in town? No? Well, too bad, because I am until Thursday. Later more, perhaps.
Posted by Chris at 18:24 1 comment: 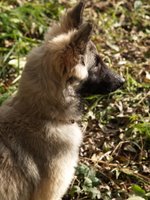 Please meet Laika, the newest member of the Dreyer family pack! Laika is a four months old, pedigreed Tervuren. She's joined us yesterday and she's currently getting used to life around here, especially to doting old Bobby and Simba, the cat. I am looking forward to training her in order to get her boldly to be what all our dogs have been to date, namely alert and friendly companions. There's a lot of training to be done for sure, but the way she responds to it already, I am confident it will work out very well.
Posted by Chris at 12:05 1 comment:

Do you feel the autumn blues? Does the reduced daylight weigh on your mind? Do you need an intellectually induced treat of endorphins? Listen to the latest programme in the BBC Radio 4's In Our Time series, where Melvyn Bragg discusses the heavily mathematical Poincaré Conjecture with three mathematicians. This cerebral workout will certainly do the job!
Posted by Chris at 15:29 No comments: