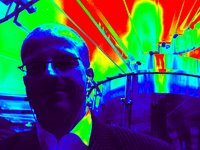 Or rather GNOL - Grandnephews online! This is the latest addition to the tribe - Loris Emanuel, and he's already got his own blog - welcome, and way to go!!!
Posted by Chris at 19:08 No comments:

Tonight's concert of the Charles Lloyd Quartett was a great preparation to get in the mood for my trip to New York tomorrow. Charles Lloyd almost paled in the presence of his incredible band, though. So, I need to check whether there are some more gigs after I come back - just glancing at the site, I see E.S.T. on 1 May!! Thanks to DRS 2 Kulturclub for the free ticket, anyway.
Posted by Chris at 22:57 No comments:

Check out this week's installment of the BBC's StoryFix, a weekly videocast. The bit about Imagine, a world where there is no news is fabulous!
Posted by Chris at 10:12 No comments:

Mr Fukuyama seems to have found his way out of the end of history quite well. Prospect has a great article about Identity & Migration which gives a lot of food for thought. So, he refers to Olivier Roy's Globalized Islam which seems to imply that radical islamism can actually be interpreted as akin to the Reformation. That's a tantalising thought, especially since many think that Islam's fundamentalist tendencies are due to its lack of something like an Age of Enlightenment - which followed the Reformation.

But that's not all - Mr Fukuyama also addresses the need for liberal European societies to strengthen their identity:

The civilisation of the European Enlightenment, of which contemporary liberal democracy is the heir, cannot be culturally neutral, since liberal societies have their own values regarding the equal worth and dignity of individuals. Cultures that do not accept these premises do not deserve equal protection in a liberal democracy. Members of immigrant communities and their offspring deserve to be treated equally as individuals, not as members of cultural communities. There is no reason for a Muslim girl to be treated differently under the law from a Christian or Jewish one, whatever the feelings of her relatives.

I fully subscribe to that, as to most of the rest of the article.

Secondly, I'd like to refer you to a great piece of contemporary Realpolitik, namely Containing Russia, by former Ukrainian Prime Minister Yuliya Tymoshenko. Ms Tymoshenko seems to have a pretty level-headed, fair view of her country's titanic North-Eastern neighbour. Let's hope she will be in a position to put it into practical policy again soon ...
Posted by Chris at 01:30 No comments:

Email ThisBlogThis!Share to TwitterShare to FacebookShare to Pinterest
Labels: politics

A Parisian in America?

Here's a rare thing: a useful review of one of French presidential candidate Sarkozy's (who would get my vote, for lack of a more reformist candidate) books in an American online magazine. American.com is quite good, btw!
Posted by Chris at 00:57 No comments:

To Russia, with doubts

I am glad to say that the preparations for my forthcoming trips seem to be coming to an end. In terms of effort, the trip to Moscow in mid May was certainly more strenuous to prepare than the trip to New York next week. I was not prepared for the paperwork required to get a visum to Russia: you need an invitation, proof of medical insurance, a physical slip as proof of payment of the visum fee ... what a hassle! Nevertheless, I hope that the Consulate will revert in time for the NY trip next week, ere immigration without a passport might turn out to be a bit difficult. Otherwise, NY is much easier to deal with: you only need to find a seat on a plane and a hotel that is not fully booked - both are equally difficult, it seems.
Posted by Chris at 00:58 No comments:

Email ThisBlogThis!Share to TwitterShare to FacebookShare to Pinterest
Labels: travel

Windows is for grandmas ...

Nice piece, but what else is new?
Posted by Chris at 23:57 No comments:

Not only has nephew #1 just published the first installment of his latest Playmobil western, but nephew #2 has also entered the blogosphere a few days ago already, and has dared to only tell me about it yesterday. The cheek of the boy! At least his motive is transparent: There shall be a vessel for the forthcoming addition to his little family. Good luck for that!
Posted by Chris at 22:18 No comments:

Here's a two minute clip of Laika saving a stick from drowning.

That is the number of mail messages that Mail Scripts has identified as duplicates in my busiest mailboxes over the last 24 hours of hard work. They're all gone now. But there's still 23'309 left - the earliest message dating from 13 November 1997. I am guessing those duplicates were a direct result of diverse migrations of legacy mailboxes to new email clients, restored backups and other such sources of confusion. But I definitely prefer it that way round ...
Posted by Chris at 20:40 No comments:

Email ThisBlogThis!Share to TwitterShare to FacebookShare to Pinterest
Labels: technology


Tiki Bar TV gives us just enough time until Easter to study the intricate set of rules that is the drinking game of Bunnies. For a flawless, yet necessarily superficial documentary of the game's enactment, see the reel referred to above. But beware, some of the bunny related action is rather rude - watch only if of legal age! That disclaimer is provided for the benefit of our transpondal clientèle, which the Royal League of Bunnies (RLB) also refers to, somewhat disrespectfully - surely the same will apply to all non-English lookers-on:

"A competent game of bunnies should be played at such a pace that the casual observer is rendered mesmerised by the velocity of the action. Most commonly, American observers will be overheard expressing bemusement and disbelief at what they are seeing. As with cricket, the finer points of bunnies will forever remain mysterious to those from over the pond, due to their innate inability to comprehend such complex goings on."

Appearances (and stereotypes!) can be deceiving: Here's a great piece from the McKinsey Quarterly about building the civilised workplace by enforcing a strict No Jerks-Rule. I am sure that lots of people who had exposure to McK would be surprised.
Posted by Chris at 22:08 No comments:

Email ThisBlogThis!Share to TwitterShare to FacebookShare to Pinterest
Labels: work

One's not supposed to be ashamed of one's past, but the pictured proof of my juvenile poor taste, I am having a hard time being proud of. I admit to having been a fan of Peter, Sue & Marc, probably when they were in their Eurovision song contest heydays. Yes, that sort of thing that DJ Bobo is now doing his controversial vampire thing for ...
Posted by Chris at 00:05 No comments:

Here's to the 50th return of the BBC's classic april fool's contribution. Apparently it worked very well back in 1957 - not anymore, I hope. Enjoy, particularly the accent!