iPhone to come with GPS? 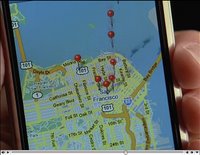 Have you already seen the new iPhone advertisements with which the launch date of 29 June is finally confirmed?

One of them promotes the hottest feature in my view, namely Google Maps. This is not new in itself, since it was part of the initial demo, but now the iPhone is advertised with it specifically, so it's for real, not just a feature preview. Now the only thing I am wondering about is: Does the iPhone know where it is, and if so, how? The obvious answer is that it has a GPS chip built in, but why hasn't that been mentioned anywhere? Or does it rely on GSM cell triangulation? I hope not, because that method's precision is inferior to GPS and depends on the topology of the network the phone is in just now. Thoughts, anyone?
Posted by Chris at 13:00

Email ThisBlogThis!Share to TwitterShare to FacebookShare to Pinterest
Labels: apple

John Gruber on the iPhone's lack of GPS:

"There’s very little room for fudging in this demo. The movie is conveniently listed at the top of the list when the iPod app opens. The Map app somehow knows where we are: my guess is that it’s like the Mac OS X Weather widget, with a preference setting for a default zip code. (Keep dreaming if you think Apple has secretly added GPS behind the FCC’s back.)"

"Why would the FCC care about GPS in a phone?", he asks, without reading the article.

The downloadable Google Maps application was one of the best things about my Nokia 6280, and the first app that has been properly useful in a mobile device. I'd keep using it with my new operator, but they charge £3 a MB for data!

The iPhone's going to be a power-hungry beast, eh?

I hope you're right, Joel! Do you have any insight as to what is and is not relevant for the FCC? But at any rate, we'll soon find out anyway.

£3 per MB? That's theft! Or active business prevention. Who's the madman?

The iPhone's power consumption doesn't look that bad: up to 5 h talk / video / browsing, up to 16h talk time. I hope Apple has taken a cue from the disappointment when the first iPods didn't live up to their promised charge lifes ...