So, my short trip to Singapore is history. The first impression of the place is one of a more formal version of California - which I like a lot! The formality certainly has to do with the echoes reverberating from British rule. I actually stayed in one of them - very recommendable! Being able to do your laps before breakfast in an olympic size outdoors pool in the heart of downtown Singapore is just great. Funny how the locals think you're crazy if you're swimming when it rains because they think it's "chilly": at about 30 degrees!

People seem to be extremely ambitious and business-minded. And when they're working in service, they're incredibly efficient and friendly. Smiles left, right and centre, which is a great change from Europe. Singapore, I'll be back. With less rain next time, hopefully! And maybe a bit better comprehension of Singlish, which I was occasionally struggling with.

My first trip on hallowed SIA turned out to be a little bit of a disappointment. Sure, the staff were just perfect, fully in line with what I said before, even in the eye candy department. But taken altogether, I think SIA Business doesn't deserve the premium it commands. Admittedly, my expectations were set by the trip down to Singapore on Swiss First, which may be considered as unfair. But somehow I got the impression that many people feel that SIA's business class is better than many firsts. That's far from true for Swiss' - I slept like a log!
Posted by Chris at 18:33 No comments: 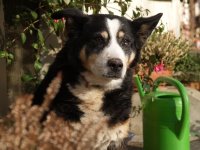 It's a sad day. Just hours before my departure to the hitherto longest trip of my life, we had to decide to put down Bobby, our 16 years old dog. An open ulcer was just too much for her - and us. You were a great dog, Bobby, and you've instructed your successor well!

And now, I'll leave for Singapore until 30 August, and onwards to Seoul, for presentations in each city. I'll return on 7 September. Until then, my mobile phone gets diverted to the voicemail directly, which gets forwarded to my email, so don't worry if you cannot catch me immediately. More later ...
Posted by Chris at 17:31 1 comment:

The best things in life ...

are free, they say. And they are probably right, as I am glad to confirm while listening to the second compilation of the Colonious Monk Collective. This is German rap at its best - full of funk, jazz and soul, just the way we like it.
Posted by Chris at 23:23 No comments:

It's been almost three years that I've been there last, but apparently I need to go again very soon! Especially now that the best chef that I've ever encountered has received a glowing review in the Financial Times ("faultless"), which alludes to the rumour that the restaurant will soon obtain its second Michelin star. This will invariably hike the price tag, so ...
Posted by Chris at 00:25 No comments: