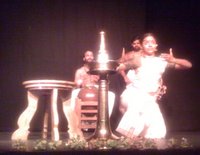 In between meetings on Tuesday, I went to see an exhibition about the Ramayana in Indian painting at the excellent Museum Rietberg in Zürich. Until now, I was only passingly aware of the Ramayana as an important part of non-European world literature, but thanks to that exhibition, I've gained a glimpse into an epic world I hardly knew existed. The glimpse was made that much more impressive by a live performance of Sanskrit actress Kapila Venu. The highly stylised and codified art form of Nangiarkoothu left me feel like an utter boor for not even having heard of it. But fortunately the exhibition helps to understand at least the Ramayana by displaying a sequence of Indian paintings from different periods and sources that is almost like a storyboard.
This reminds me of another exhibition about an important piece of world literature I saw, but never actually blogged. Earlier this year, Antikenmuseum had an exhibition about Homer, which has moved on unfortunately. As a once student of Latin and thus the antiquities, I felt much more comfortable with the object of that exhibition, i.e. there was much less to learn, but a lot of forgotten stuff to resurface. Nevertheless, I was most captivated by a one man show of H.-Dieter Jendreyko, reciting two books from the Iliad in a way that was probably very authentic. One man's unassisted (Homer didn't need Powerpoint) monologue in classical language for about an hour is well beyond today's regular attention span, but Jendreyko's rhapsodic was so lively and passionate that he never lost his audience for even a second. Great art, indeed.
P.S. Two things I've been wondering about: Why is Rama's skin blue? And why would Bharata refuse to become king?
Posted by Chris at 23:25

Indian gods are commonly depicted with blue skin. Most common is Krishna. And Bharat thought his brother deserved the throne, even though his mother didn't.

But about this Bharat guy: Could a contemporary Indian still relate to his decision today? This barely motivated abdication seems to be a bit over the top.