The iPhone after next?

I'm breaking my silence here for a technology forecast about the next generation in personal portable (wearable?) devices. I have a feeling that it might be a QD Laser projector enabled thing that enables a Sixth Sense User Interface, thus making screens, keyboards and other such gadgets redundant. I'm looking forward to it!
Posted by Chris at 19:53 No comments:

Well, I've taken the jump at last and bought Navigon from the App Store. My trusty old TomTom GO 700 will be gone by tomorrow, and so will the special price for Navigon (hurry if you're planning to do the same). But that's not the only reason: I've been waiting for the TomTom app to come out because it is the market leader, but reading comparative reviews, the two competitors seem to be running side by side, with a slight advantage for Navigon. For me, the main reason for choosing Navigon over TomTom is that their coverage is substantially better (more countries in Eastern Europe). The substantially better price (for now) is rather convincing, too.
I've already tested Navigon a little bit, and it works well. The only issue is its massive drain on the battery, especially when listening to music on the iPod while driving. But this will be addressed by a phone stand charger. I've seen two interesting models so far from Belkin and Griffin. So, even the announced, but as yet unavailable TomTom stand is no argument.
Posted by Chris at 10:50 4 comments:

Email ThisBlogThis!Share to TwitterShare to FacebookShare to Pinterest
Labels: iPhone

Since I'm beginning to approach the advanced old age and degree of baldness where wearing a hat seems increasingly commendable, if not medicinally required in hot weather, I've been beginning to shop around. Obviously, the common cap hardly suits my sense of style, but conventional hattery somehow does not cut it either.

That's how I came across LeTom in a podcast programme. Have a look at their collection - it's about as smart and unconventional as their advertisement lets on. There's an interesting story behind that, too ... anyway, I'm looking forward to wearing my LeTom soon!

This is my digital persona - nice, isn't it. It's particularly interesting to watch its creation, so go ahead and have your own!
Posted by Chris at 23:33 No comments:

Reading this fun conversation on literature ("I no longer understand what arrogant means") between Nassim Taleb and Rolf Dobelli gave rise to the discovery of a musical black swan when Taleb mentions that musicians don't do music about music. As you now know, Glenn Gould did, and he certainly was a musician, even though one of black swan quality.
Posted by Chris at 16:36 No comments:

Email ThisBlogThis!Share to TwitterShare to FacebookShare to Pinterest
Labels: finds

A favourite of mine

This is a piece I can never get enough of - clever, smart, complex ... you can just see the composer having fun in writing it! Glenn Gould rules. 
My nephew Tomi's other hobby horse on Swiss TV for your viewing pleasure ... enjoy!
Posted by Chris at 14:09 No comments:

Perhaps you've heard of the self-development book by the same title? I haven't read it, and I'm pretty sure that my dog hasn't, either. And yet, she seems to be much more business-minded than her master, because she actually refuses to eat without company, even though the food bowl is right next to her bed. Very odd.
Posted by Chris at 01:10 No comments:

Email ThisBlogThis!Share to TwitterShare to FacebookShare to Pinterest
Labels: Laika

I'm not trying to escape from a party - far from it - but I'll be spending my birthday this year in Florida at a CFA conference. Leaving tomorrow, back on 1 May. See you then ... and don't forget to drop all these presents!
Posted by Chris at 23:52 No comments:

No idea why I haven't posted this when it actually came out ... especially since I contributed the subtitles. Have fun with my nephew Tomi's latest opus magnum!

Another trip, another gadget

Coming home from my latest London trip on Thursday night, I found a nice surprise: Following my rather favourable comments and suggestions about their mobile charger, Lifetrons sent me their Xmini capsule speaker - thank you very much! Now, although you're apparently not supposed to look a gift horse in the mouth, that's exactly what I'm going to do:
The Xmini is a tiny technical miracle the size of a golf ball that's been chewed on by Laika - when closed. When opened, it folds out like an accordion to provide the resonating cavity required for a mighty big audio effect. Hearing is believing! It comes with a double mini-USB cable that plugs into the device and a powered USB port (for charging only) or a 3.5 mm audio out port suitable for most devices. An amazing little thing!
But again, under-marketed. Those Lifetrons guys need to do something, and quick, the competition isn't sleeping. Compare the Powerstick - it doesn't even pack a sixth of the performance of the Lifetrons product (which is still not available on their own web store!) with a similar form factor, but it is much more visible and will therefore sell a lot better. Wake up, guys!
Posted by Chris at 12:46 No comments:

This blog is slowly mutating into an iPhone blog, what with the slow frequency that my few readers must have noticed. The reason for that btw is that I've become more active on facebook for very short links and notes and stuff. If you want to keep up with what's going on, move over to my fb profile and find out whether I want to be friends with you ;)
But back to the topic at hand: Yesterday, the Swiss Railways SBB have gone public with a mobile phone based ticket shop. Me being the avid rail traveller that I am, I tried to upgrade my account to it straight away, only to find out that the shop is not compatible with iPhone! Seeing how iPhone has a wide distribution in the Swiss market, and iPhone users tend to be heavy web users on the road, that surprising, to say the least.
But chances are that this is a transient issue, as I heard today from SBB: A version 2.5 of their app is already in the works and scheduled to see the light of day at the beginning of March. This version should take care of the stability issues that continue to crash the app on my phone. And by mid year, the app is planned to include the mobile ticketing feature! Now if that doesn't sound like good news!
Posted by Chris at 19:58 No comments: 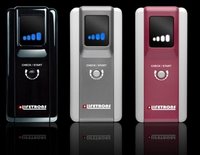 If you think, like I do, that iPhone's only real hardware shortcoming (software ones such as missing video recording will hopefully be dealt with soon) is that there is actually too little of it, i.e. that its battery doesn't survive a day of heavy usage, then I have found a must-have little gadget for you: the portable charger LT025 from tiny Swiss firm Lifetrons. The charger takes a charge of 4800 mAh (probably about 3 iPhone charges), which it delivers actively to iPhone, i.e. it is not an external battery pack that needs to remain connected to be effective, it actually charges iPhone, and it does it very quickly. The gadget's power input is USB and it charges lots of other mobile devices via a plethora of adapters for its USB cable. The device's footprint is smaller than iPhone's, but it is about 2 2.5 times thicker. The device is well designed and nicely executed.
But as the title of this post holds, it is a hidden gem. So much so, in fact, that I only stumbled across it in a duty free catalogue. Strangely, Lifetrons only distributes via airlines and duty free shops, and they don't market their wares actively - it is not even available in their own online store. At least not for the moment, I'm told by their CEO. Another instance of under-marketed Swiss engineering ingenuity? You bet! I hope they get their marketing act together really soon, because they deserve it!
Here's the anecdote of the purchase: I saw the description on my way to Brussels and decided to hold off on buying until I could do a little online research, which I did in Brussels. But it yielded very little, there's virtually no online reviews available nor, as mentioned, alternative distribution. So, I decided to buy on the way back, even though Swiss has all three colours as long as it's white/silver. But I created a bit of a stumbling block for the friendly flight attendants - the catalogue advertises that you can pay with M&M Miles rather than cash, which I wanted to. But their payment appliance didn't work, so we had to use a regular credit card slip. Now, I'm a little nervous that I am going to be charged CHF 22'000 for the device rather than 22'000 miles ... keep your fingers crossed!
Posted by Chris at 23:12 No comments:

Last week, I went to see the Venice exhibition at Fondation Beyeler before its close this Sunday. I wanted to see it not so much because of its subject matter (which I hate to admit that I haven't visited, yet), but because of the Turners. I'm a big fan of J. M. W. Turner, you see. And it was very worth while, there are plenty of my objects of admiration.
But the funniest thing happened when I "progressed" from the Turners to Monet's renditions. My eyes started to hurt! When you're used to trying to understand what Turner puts on display through his atmospheric fog, it really comes as a shock to the system to see Monet's bright colours and heavy shapes. Quite the experience!
Posted by Chris at 00:26 No comments:

It's not often that I'm posting music videos, but my niece's (first ?) foray into that specific genre is definitely worth it! Hint: She's every bit as mad as she seems to be - have fun!

Good news in my bank account statement today - a wire payment from a Dublin based finance services firm, representing no other than Google! This is the first payment ever that I receive as a result from my Adsense membership and people using those ads. Great - it actually pays for two months of internet access. Never mind that it's the first payment in four years' worth of membership ...
Posted by Chris at 21:51 No comments:

Email ThisBlogThis!Share to TwitterShare to FacebookShare to Pinterest
Labels: web

We've been fairly early in beginning to speculate that Steve Jobs might sooner or later end his tenure at Apple - some will say, way too early, especially seeing how discussions are heating up again following Apple's cancellation of its Macworld participation. But now, we have it from His Steveness, namely that he is not intending to step down just now.
On the very same day, intrade has opened two contracts where participants can speculate about whether Jobs will resign before June or December 09. I'll make sure to keep watching. There's no trading so far, and both contracts are at about 20% likelihood. If you own AAPL, you may want to go long those contracts ...
Posted by Chris at 18:20 No comments: