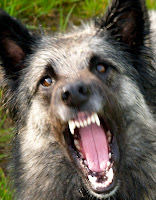 The small, border village of Schönenbuch has suffered a high incidence of break-ins of late. Some say it coïncides with the abolition of border controls due to Schengen, but I'd say that's a post hoc, ergo propter hoc.

Anyway, here's the stupid story: There was an attempted break-in at my neighbours' house across the street yesterday night. Their house is secured by an alarm, which I heard going off, but didn't do anything about it because I thought it was a car alarm of one of the visitors they had earlier. I didn't realise that everybody had left, so I didn't care, and that was stupid of me because I could have and should have intervened.

But that's not the end of the story. Because of the aforementioned break-in activity, we often have a police patrol positioned behind the house to watch for suspect activity - so yesterday night. But they hadn't heard the alarm either! So there was in fact a police patrol less than 100 metres away from the attempted break-in, and the perpetrators are no worse for wear, except maybe for the thrill when the alarm went off! How embarrassing is that?! Touch wood, but I'm increasingly convinced that we would have had break-ins in my house a long time ago, were it not for the evil Laika!
Posted by Chris at 15:45